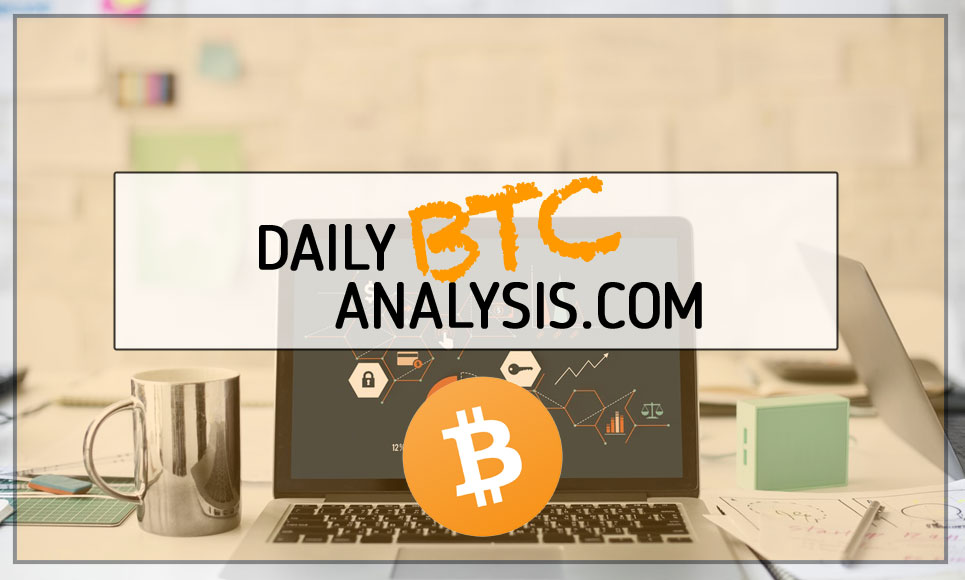 Welcome to the first Bitcoin analysis at DailyBTCAnalysis.com. We intend to provide accurate and highly detailed analysis of Bitcoin on a daily basis…simple! Most importantly, it will all be free!

The cryptocurrency has seen a daily volume of around $5.36 billion over the past 24 hours of trading as the daily volume starts to climb slowly.

What is the market cap of Bitcoin?

Bitcoin is the number 1 ranked cryptocurrency as it holds a $64.06 billion market cap value. The cryptocurrency has seen a precipitous price decline totalling -44% over the past 90 trading days as the 69 month old veteran now trades at a value that is 81% lower than the all time high price.

Let us begin to take a look at BTC/USD over the long term.

Analysing BTC/USD from the long term daily chart above, we can see that price action had formed a strong support level at the $6000 handle throughout the majority of the year. Each time price action would approach this support level the market would rebound and travel higher.

However, the market was only trading with the confines of a descending wedge formation and as BTC/USD approached the apex during November 2018, we can see that the market had collapsed, violently, below the bottom boundary of the wedge at the $6000 handle.

We can see that price action had plummeted from the high in November 2018 by a total of 51% to the low seen in December 2018.

Let us continue to take a look at price action a little closer over the short term and highlight any potential areas of support and resistance moving forward.

What’s been going on?

We can see that the previous market decline that began in November 2018 had reached a stalling point as it approached a medium termed downside 1.618 Fibonacci Extension level (drawn in blue) priced at $3228. After reaching this level of support the market went on to rebound toward the latter half of December 2018.

Toward the end of December 2018 the rebound had met resistance at a bearish .786 Fibonacci Retracement level (drawn in red) priced at $4215. Price action was unable to overcome this area of resistance on the daily chart and began to slowly decline.

Where are we now?

As 2019 began to trade, we can see that price action re-attempted to break above the resistance at $4215 but had failed again. After failing, the market rolled over and fell sharply.

The market has since rebounded from the support at $3569 and is now trading back above the support at the short term .618 FIbonacci Retracement level (drawn in green) priced at $3664.

What is the current trend??

The current trend of Bitcoin in the short term is currently neutral as the market trades above the support at $3664. However, if price action breaks below the $3569 handle again we can expect the trend to resume its bearish trajectory.

If the bulls do push price action below the support at $3664, we can expect immediate support below at the short term downside 1.272 and 1.414 Fibonacci Extension levels (drawn in blue) priced at $3569 and $3508, respectively.

If the sellers manage to continue to push price action below the $3400 handle, we can expect further support to the downside to be located at the short term .886 Fibonacci Retracement level (drawn in green) priced at $3350 followed by more support at the medium termed downside 1.618 Fibonacci Extension level (drawn in blue) priced at $3228.

What if the bulls regain control?

Alternatively, if the bulls manage to regain control of the market momentum and begin to push price action higher from the support at the $3664 handle, we can expect immediate higher resistance to then be located at the bearish .5 and .618 Fibonacci Retracement levels (drawn in red) priced at $3851 and $4001, respectively.

If the buyers can continue to cause price action to climb above $4001, we can expect higher resistance to then be located at the bearish .786 and .886 FIbonacci Retracement levels (drawn in red) priced at $4215 and $4342, respectively.

If the buying pressure can cause BTC/USD to climb above the $4500 handle, we can expect more resistance to then be located at the longer termed bearish .382 Fibonacci Retracement level (drawn in dark blue) priced at $4567, closely followed by more resistance at the short term 1.272 and 1.414 FIbonacci Extension levels (drawn in orange) priced at $4710 and $4877, respectively.